The last few weeks has been  mixture of highs and lows. I have had a couple of PB’s on shorter runs and then other runs I felt like I have been hitting a wall and not getting any progress. I have kept consistent and I am seeing the rewards of putting the miles in and focusing on specific training styles rather than just getting out running and hoping for the best.

Week 6 seen my hit a 10km PB. It was a group run one weekend with 2 other runners who have signed up to the Half Marathon event. Early on a Saturday morning we hit the canal which is nice and flat so we could work on hitting a consistent pace which will be vital when race day finally arrives. We started with a steady 5:00km/h splits for the first half of the run, second half we decided to up the pace and really work towards a negative split and aim for a good finish. Naturally the distances got greater between one and other and we had to concentrate on our own race for the last 5km. My new short term goal for my 10km is a sub 45:00. This will help long term with power in my legs and work on my threshold to be able to sustain a faster pace for longer on race day.

After the PB I decided I was really going to strip back the long runs to once a week and concentrate on my speed work. Majority of these runs/workouts have been on a treadmill using a pace chart and sticking to a set pace. The below picture is one of the workouts I have completed. The theory behind this training is I push my heart, lungs and legs to certain point and hold it before bringing the pace back down and recovering and then repeating or use a different pace and distance to increase my ability to run faster and harder for longer with out having to slow down or stop completely. 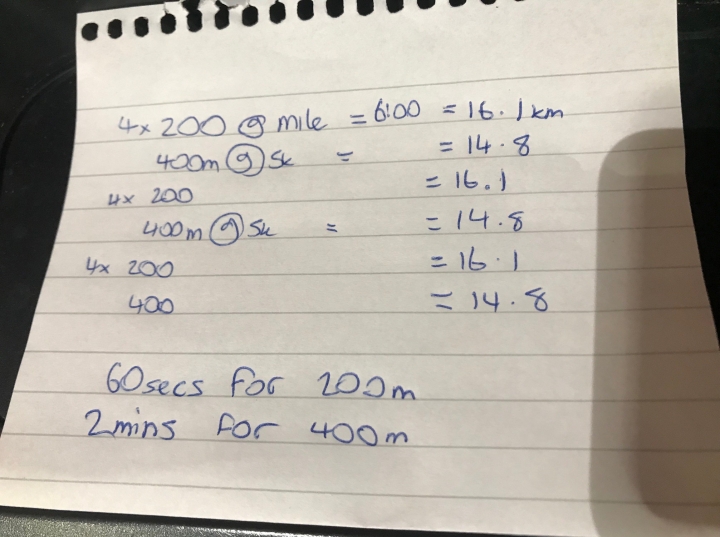 A couple of more weeks down the line and I have been gradually adding runs in and getting the distances in over the weeks and decided to see where I was up to with the half marathon distance (21.1km) I had completed it previously and got a very average time of 2:12 which I was happy with for a first attempt at that distance. This time I was focused on hitting consistent splits and I aimed for a comfortable 5:00km/h average splits. Needless to say it wasn’t easy but I managed to hold that pace and even hit a few 4:50km/h to bring my time down. My breathing was controlled but towards the last 5km I felt like I needed to take on more fuel as my legs were heavy and lower back was aching a lot. I had taken on 2 Carb gels while running the first half of the run. I finished the race with a personal best 1:44:17. My aim for the race itself was sub 1:50. I have now challenged myself to get a sub 1:40 on the race which will be very hard but not out of reach.

Encouraging an active lifestyle, no matter your age, ability or experience.

For more information on memberships at OHLC:
Membership Options