We spoke with Rochdale Underwater Hockey player Jack Midgley about his trials for Team GB.  The British Navy invented underwater hockey in the 1950’s to keep their divers fit and improve their ability to move and work efficiently under water.   It has since evolved into a fast, dynamic sport played in more than 20 countries. 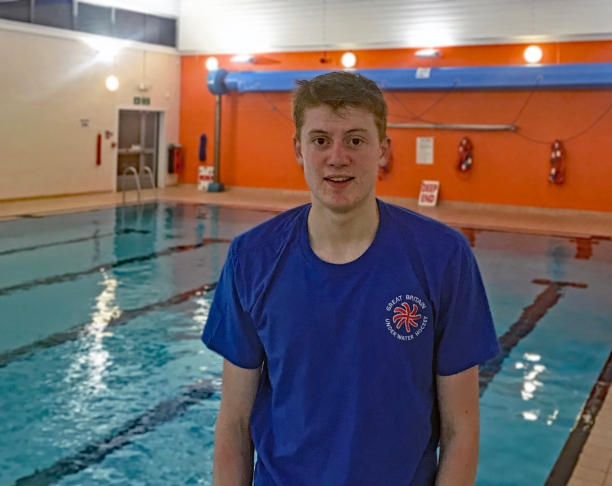 Jack, 18, has been playing underwater hockey for 7 years and has his sights set on making it to team GB for the 5th Word Age Group Championships in August 2019.  We are proud to sponsor Jack with a complimentary gym membership to aid his training for the ongoing trials.

What is under water hockey?

Underwater Hockey is a team sport played on the bottom of a swimming pool. Using a short stick, players of each team swim to the bottom, and try to get a puck into the opposition’s goal, at the opposite side of the pool.

What makes it fun?

I think the best part about it is the teamwork.  Working with other players underwater, where you cannot communicate to each other makes it more challenging than other sports, and in my opinion, lots more enjoyable.

Can you settle a debate for us, it underwater hockey or octopush?

It can be called either, although I and most people refer to it as underwater hockey, or just “hockey”.

How did you get into underwater hockey?

A friend started playing the sport quite a while ago, and asked if I wanted to join him.  Seven years later and I’m still playing!

What training do you do to get ready for team GB trials?

I play hockey 3 times a week in the evenings. I also take part in a Parkrun every Saturday morning at 9:00, and use a heart rate monitor called a MyZone Belt to track any workouts that I do during the week, which the GB coaches can see.  I am a member of OHLC, I use the gym for my training. OHLC have also allowed our club to use the Street, a large indoor space within the school, for us to practice fitness tests that are required as part of the GB selection process.

What obstacles have you faced on your journey to the team GB trials?

I trialed for the previous squad, and unfortunately didn’t make it, so I am going for it again this year. School work, exams and applying for University are also very time consuming things I have had to do, so managing to train alongside this has been difficult.

What would being picked for the GB team mean to you?

It would be an amazing opportunity to play alongside some of the best under 19 players in the world, and would be a fantastic way to put to use the past 7 years of playing underwater hockey, representing my country.

What would your advice be to anyone thinking of getting involved in underwater hockey?

Just give it a go!  It may sound strange or unusual, but it is loads of fun and so rewarding if you train hard.

1 in 3 children in England aged 7-11 are unable to swim 25 metres unaided, do you think learning to swim is important?

I think so yes, as you never know when being able to swim could help you or somebody else in an emergency.  Not only that, but it is a great way of keeping fit and healthy.  It opens up so many doors to other activities you can do, such as underwater hockey, where you meet lots of new people and have lots of fun.

Rochdale Underwater Hockey beginners and junior’s meets every Thursdays 7.30-9pm at OHLC.  Starter equipment is provided for new members; just bring your cossie and a towel!  All instructors hold DBS clearance.   Anyone is welcome provided they can swim at least two lengths and are confident in the water.  These sessions are also suitable for adult beginners and any other players who wish to improve their fitness or practice skills.  Find out more at ohlc.co.uk/clubs.html

Great Britain Underwater Hockey is a self-funded international team with 8 different squads.   You can support GBUWH (gbuwh.co.uk/) and their athletes by doing your everyday online shopping and no additional cost to yourself, every transaction raises much needed funds for the team.  easyfundraising.org.uk/causes/gbunderwaterhockey/

Leisure Manager. With 16 years experience, my role is to provide leadership and management of the centre. My aim is to create a friendly, inclusive and welcoming environment for everyone. I love working at OHLC, it's a great community of people from our team to our members and customers. Outside work, I have a passion for live music and enjoy camping, cycling and walking. View all posts by Nikki Jackson

Encouraging an active lifestyle, no matter your age, ability or experience.

For more information on memberships at OHLC:
Membership Options

It's National Receptionist Day!
Mental Health Awareness Week 2022
Happy Earth Day!
Congratulations to the following members from the Rochdale Underwater Hockey Club who have been selected to represent Great Britain at a tournament in France this summer.
We’re open over the Easter weekend, join us for a swim 💦
Easter opening hours!
Loading Comments...
%d bloggers like this: